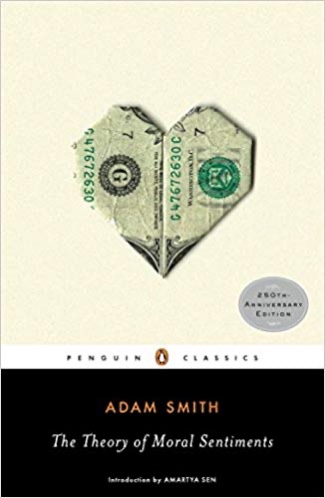 The passage is taken from the „Theory of moral feelings“, in which Smith examines the way in which we approve or not approve the conduct of other people, by means of our sympathetic identification.

In fact, we evaluate human behavior by judging the actions of others impartially, then transferring this evaluation onto ourselves. So we can arrive at a social, and not purely selfish, determination of moral rules. In this passage a definition of sympathy is given; it is not the simple and generic participation in the passions of others; if this were the case, there would be passions for which we do not sympathize. Instead, this must be understood as that ability that each possesses to find their emotions in the consciousness of others; it therefore means living certain experiences by judging the actions of others starting from what would be ours „if we were in their place“.

Sympathy is therefore the fundamental form through which we formulate every moral judgment. This makes us participate in every emotion of others, both pleasant and painful. Smith states that no matter how selfish man may be, there are principles in nature that lead him to be interested in others: pity and compassion. In fact, it is certain that we often derive displeasure from the displeasure of others, and this is not only the prerogative of benevolent or virtuous men, but also of the worst criminals.

However, we cannot know what others are feeling, therefore we identify ourselves in that situation; sympathy, in fact, operates through a mechanism of identification, using the faculty of imagination. It is only through the imagination that we can conceive in some form what its sensations are. Our imagination only reproduces the impressions of our senses, not of his. Finally his sufferings, when they entered us, begin to impress us. Smith also states that it is the contexts in which we find ourselves that make us move. So sympathy works through an understanding of the causes and situations that cause them.

There are also passions that do not generate sympathy in us, but disgust us, like violent behavior. How a sentiment is judged: According to Smith, identification with the situation of others is such an instantaneous phenomenon that it cannot be considered as the result of a selfish calculation. We always seek the help and encouragement of others, and get great satisfaction from their sympathy.

Smith’s philosophy: the way in which we approve or not approve of other people’s conduct, through our sympathetic identification. Identification in the situation of others.